Thomas Liljeruhm is a 34 year old songwriter from Stockholm, Sweden. He mostly write lyrics for country, pop and EDM music. He believes that his songwriting is a bit different from the rest because of his mixed musical influences (Swedish). He's mostly a lyric only writer, but he always has a melody in mind. What started out quite innocent for about ten years ago now takes up a large part of his free time.

He recently graduated in Human Resources at Stockholm University and he's currently looking for a job in HR/recruiting.

Thomas is a huge country music fan and he attended the CMA Music Festival in Nashville in 2010, 2011 and 2013. He has also been to a lot of country music concerts including country super stars of today.

However, crossover country artists like: Shania Twain, Faith Hill, Dixie Chicks and LeAnn Rimes might be the ones to blame for his unsusual taste in music. But today he listens to everything on country music radio and he hopes that one beautiful day they will play one of his songs.

Thomas is a proud member (citizen?) of SongTown since 2014. 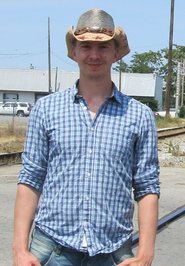 Finalist in "Song of the Month"

("I Still Haven't Found Your Flaw")

"Recommended for consideration at our next 'Pitch to Publisher' luncheon!"

("I Still Haven't Found Your Flaw")